What is it? The Nuvaring is a flexible plastic ring containing progestin and estrogen.
Effectiveness: approximately 91% effective in typical use (but can be more effective if used consistently and correctly). 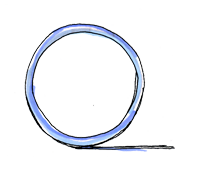 Price: $15-$30 per month
How do you use it? You insert the plastic ring inside your vagina and change it every month.

Other information: Often has fewer side effects than pills or patches. When there are side effects, they usually go away within three months.

How does the NuvaRing work?

The NuvaRing releases the hormones estrogen and progestin (same as the birth control pill) which prevent the release of an egg from the ovary (ovulation).  When used perfectly the NuvaRing can be over 99% effective in preventing pregnancy. In actual use it is 91%, meaning an average of 9 people out of 100 get pregnant in a year using the NuvaRing as their only form of contraception. This is usually due to user error. The NuvaRing does not protect against sexually transmitted infections. Using condoms with the ring will provide you with protection against both pregnancy and STIs.  It is also recommended to get tested regularly for STIs.

How do you use the NuvaRing?

The NuvaRing is inserted inside your vagina. Wash your hands and take the NuvaRing out of the package. Hold it between your thumb and index finger and squeeze the ring until it is long and narrow enough to insert inside your vagina. It might help to sit on the edge of your bed, squat, or sit on the toilet – just don’t drop it! Use your finger to reposition the ring until it is comfortable. It doesn’t matter what position the ring is in; as long as it is inside your vagina it will work. The NuvaRing will not go in too deep or get lost inside your vagina.  Tampons can be used safely at the same time as the Nuvaring.  Just make sure not to pull the ring out when removing a tampon. When you want to remove the ring, hook your finger under the rim or grab it between two fingers and pull it out gently. If you are having trouble reaching the ring, squat down or sit on the toilet, relax your muscles and try again. If you have extra NuvaRings, you can store them at room temperature (25 degrees C) for up to 4 months, but it is best to store them in the refrigerator especially in hot weather.

When do you start the NuvaRing?

You can start using the NuvaRing at any time in your cycle. You do not have to wait for your period to come.  If you’ve had a medical abortion, you can insert the NuvaRing once you have had a check up and the doctor says the abortion is complete.  You can also insert the NuvaRing on the day following a surgical abortion, even though the aftercare instructions might be to not put anything inside the vagina for a week.  Because the NuvaRing is sterile it is OK to put it in – just make sure to wash and dry your hands really well before.   With any of these options, use condoms as a back-up or abstain from intercourse until you’ve had the ring in for seven full days.

When do you change the NuvaRing?

You can decide whether or not you want to have your period when you are using the NuvaRing. It is okay to skip your period when you are using hormonal contraception because the lining of the uterus does not grow as much and does not need to shed every month.  Therefore, it is not necessary to have a period.  However, some people like to have one each month as reassurance that they are not pregnant.  You can use the ring in the following ways:

What do you do if the NuvaRing falls out or is broken?
If you can feel the ring slipping out, just use your finger to push it back into position in the top of your vagina. If the ring is broken, discard it and replace it with a new ring – there is no need to change when or if you take a break or use back up birth control.

If it is out for more than three hours:

With either of these options, use a back up method such as condoms or abstain from sex until you have had the ring in for a full seven days.  If you have had intercourse without any protection other than the ring (for example, condoms) within seven days before or after a NuvaRing has been out for more than three hours, it is safest to use Plan B (emergency pills – these can be used up to five days after unprotected sex) or have an emergency copper IUD inserted (up to seven days after unprotected sex).

What do you do if you put your next NuvaRing in late?

What do you do if the ring bothers you or your partner during sex?

The NuvaRing isn’t likely to bother you during sex, and it is best to keep it in.  It is not recommended to take the ring out during sexual intercourse.  If you do remove the ring for intercourse, do not leave it out of the vagina for more than 3 hours in any 24-hour period.

What kind of side effects can the NuvaRing have?

There is no increased risk of vaginal infection with Nuvaring use and the ring does not cause weight gain.  The Nuvaring will not make it harder to get pregnant or have children in the future – when you stop using the ring your fertility will return very quickly.  It can also have good side effects. Many women find their periods get lighter and less painful, and this can be helpful with anemia (low iron).  Some women also find that their acne improves. Women who us the ring may have a significantly smaller risk of developing ovarian and endometrial (uterine) cancers. They may also have a much lower risk of having a serious pelvic infection that can affect future fertility.

The NuvaRing tends to have less negative side effects than birth control pills or patches.  The most significant negative effect is a slightly increased risk of blood clots (deep venous thrombosis, DVT).  There is a lower risk of blood clots when on the ring than there is during pregnancy. It is highest in the first 6-12 months of use.  Other side effects are headaches, vaginal wetness, decreased sex drive, nausea, and breast tenderness. Often these go away after the first three months.  If you want to stop using the NuvaRing, talk to someone first to lessen the chance of pregnancy.

If you have any of the following symptoms see a doctor immediately as they may be signs of a serious problem:

Who should not use the NuvaRing?

Back to Birth Control Methods